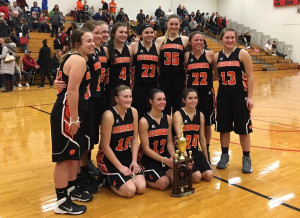 The Lady Apache basketball team entered the Wabash County Tourney on a six game losing streak, and far from the favorites, but found a way to defeat Southwood 43-42 in the opening round and Manchester 53-39 in the championship game to win the County Championship for the third straight year. Jaycee Parrett, Bailey Yoakum and Sabrina Wagner were named to the all-tourney team and Parrett was named tourney MVP.