By the Daily Apache Staff

Wabash Fall Athletics had a great season all around.  Collectively, our teams won two conference championships, a sectional championship, and one team qualified for regionals and semi-state.  One individual was able to make it to the finals of our state tournament.  We are excited for our Fall Athletics’ success and look forward to the success of our Winter Athletics. 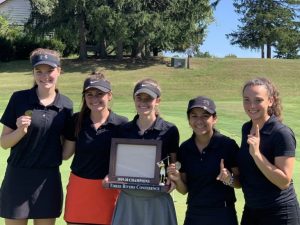 Under the direction of Tyler Olson, the girls golf team had the most successful season in school history. Coach Olson stated, “The Wabash Apache girls golf team had a historic season. [We experienced our] first conference championship and sectional championship…The team worked hard over the past few years to make this season a tremendous success, and I was glad to see their dedication pay off in a great way.” The ladies finished the season with an outstanding record of 13-1. Bella Carrillo captured the individual champion spot at conference.  The ladies did not stop there. They went on to win the team sectional championship at Arbor Trace advancing their team to regionals. Senior Lindsey Mattern added that “the excitement started when Reporter Jacob Rude predicted we would be the team to watch this season and did not die out until several weeks after our season had ended.” Congratulations to the team for their accomplishments this year. 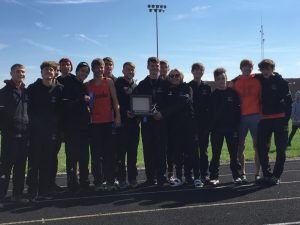 Under Coach Ryan Evans, the boys cross country program had another dominating year.  The team was able to capture the TRC championship for the third consecutive season. Along with winning the conference championship, they were able to advance as a team to regionals and semi-state. Dereck Vogel capped off a stellar senior season by placing second at conference, first at sectionals, second at regionals, and 19th at semi-state to advance to the state meet where he placed 92nd. Coach Evans summed up the season by focusing on the positives: “As a group I am happy that everyone on the team who stayed injury-free ran personal records when it mattered most. The guys who ended their season at conference all ran lifetime personal bests. The top seven who ran in the state tournament all ran personal bests at some point in the series of meets.” Coach Evans looks forward to having returning runners and the addition of new talent next season to continue the success of the program. 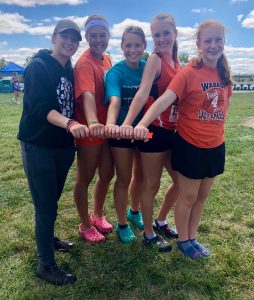 The girls cross country team had a season full of personal records. Seniors Camille Kugler and Angel Wehrly capped off their careers running PRs of 24:04 and 23:56, respectively. Junior Sierra Hall finished off her season running a PR of 24:05 and freshman Grace La Mar finished her first high school season with a 26:46 PR. The girls competed with every level of competition and continued to improve. Coach Lloyd has shown her girls what it means to run with heart and be better leaders: “As a whole, the team was filled with quiet but stable leaders that became role models through their actions and their encouragement to teammates. To me, that’s the best type of leadership, one that leads by example, and I was fortunate enough to have four!” Congratulations to the girls team on a season full of growth. The team looks forward to having two athletes return and hopes to continue to build the program. 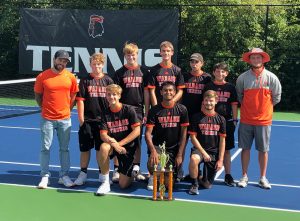 The boys tennis team had a strong season, finishing in the top three in Conference with a score of 6-2. Even though the boys played a tough first round during sectionals and were defeated as a team, Rob Ford became Wabash’s sectional champion. Rob progressed onto regionals where he played a solid match but just came up short. Rob stated, “All of us improved and grew together this year. We were able to compete at each meet and even got some wins. It was a really great way to end my high school tennis career.“ Coach Macaluso believed that his team had a spectacular season: “I was very proud of the team’s success this year…Our kids showed major improvement from the start of the season. Rob Ford had an amazing run in the singles tournament and an amazing career at WHS. The seniors will be hard to replace, but I am excited [to see] where the program is headed.” The boys tennis team hopes to keep working hard during the off season.

Wabash Football made some improv 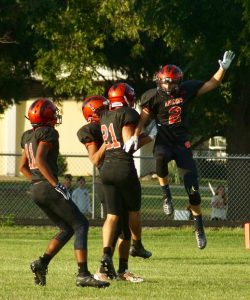 ements this year.  The football team went 4-6 on the season and 3-5 in the conference.  The team had its ups and downs but experienced some great highlights throughout the year, including senior Kallen Kelsheimer eclipsing the 1000-yard mark. In the past 10 years, Kallen is the second Wabash player to have accomplished this.  The team had its fourth-best season it has had in the last 40 years and finished fifth in Conference. Kelsheimer summed up the season, saying, “It was a great season for our school, and I will miss it so much.” Coach Handley added that the “2019 class was a huge part of changing the culture of Wabash Football.” Photo by Sabine Thomas

The Wabash girls volleyball had a comeback season this year, after losing eight players (including the entire starting lineup) after graduation. The team en 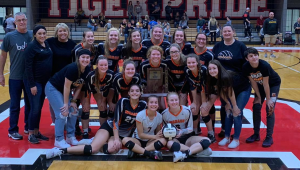 ded with an overall 24-12 record and fell just short of another regional title. However, the girls were able to build a new team and exceeded expectations. The ladies captured yet another sectional championship, and senior Haylie Foust reached 1000 digs in her high school career. For the All-County Team, Coach Cromer was voted the County Coach of the Year, juniors Jordan Stumbo, Alivia Short and Mariah Wyatt made First Team, and seniors Haylie Faust and Lexi Westendorf received Honorable Mention.  Lexi Westendorf, the team captain, reflected on the season: “Not only am I proud of how far we went this season, but I am also so honored to play with these girls and have as much fun as we did.”  Congratulations to the Lady Apaches on another remarkable season.

This season was a historic one for the Wabash High School boys soccer team. With the program beginning just under four years ago, the team set numerous records. Not only did the Apaches smash their previ 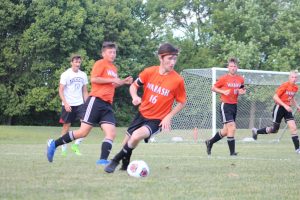 ous record for most wins in a season, but they also posted the most shut-outs in all the previous seasons combined. In addition, the boys finished second in the conference with their only conference loss coming from the Manchester Squires. Assistant Coach Zach Wenrich recapped the season by acknowledging the team’s core team values, which were used to define the program: “Although most of the team didn’t like the test [they had to take to be able to play], I am grateful that everyone passed,” Wenrich reflected. “I think our record shows we were relentless, self-disciplined, and tough to win so many games. We had a lot of people score goals this year, so we were quite selfless in terms of passing the goal-scoring responsibilities.”  Senior captain Wyatt Davis recalled his season’s accomplishments, noting that the “team chemistry and hard work was the biggest key to [their] success this year.” Photo by The Paper of Wabash County

For only having a soccer program for four years, the Wabash girls soccer team has excelled each year. This year, the Lady Apaches had a challenging season but managed to beat North Miami and go onto play at sectionals. Coach Keisha Wright stated, “I’m very proud of the girls this season! They finished fourth in the conference, after beating North Miami for the first time in program history, and 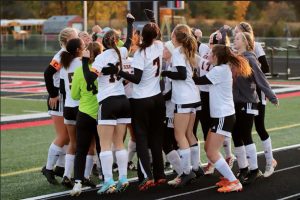 reached the sectional championship game for the second time in program history. These girls played with such heart all season.” Although the girls experienced a few losses, they continued to focus on the positive. Senior player Evelynn Gray said, “I couldn’t have asked for a better team to play with for my soccer career. The only thing I would change is how bad our cleats smelled afterwards.” Next year, the girls hope to advance in sectionals again but are striving to make it further. Congratulations on a great season. Photo by Jacob Rude.

Under the leadership of Unified Director Jen Smith and Coach Kyle Wieland, the Unified Fl 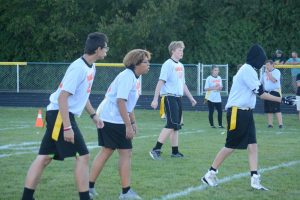 ag Football team completed its inaugural season, participating in six games. As the director, Smith enjoyed seeing the athletes taking on different positions within the team and seeing fans coming to support the athletes at the home games. “There is still room for improvement,” Coach Smith said, but she “looks forward to building new plays, adding depth to the team roster, and continuing to develop the program next season and the ones to follow.”  Photo by The Paper of Wabash County